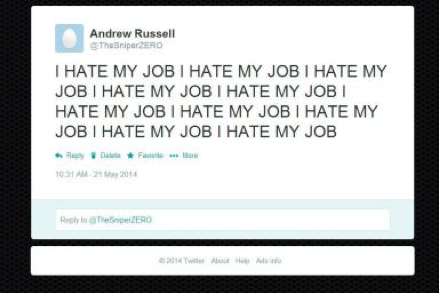 When posting to any social media platform, it might help to think of all of it as potentially public. Remember that anyone can take a screenshot or copy and pass on your post without your knowledge.

There’s something about social media that enables users to say or do anything and think they can get away with it. Is it the fact that they are hiding behind a screen? Or maybe they are pretending to have an alter ego?

In the age of social media there’s a phenomenon that sees users across the world, broadcast messages to the masses that they might not actually say aloud. Whatever the reason, negative or inappropriate social media posts can have severe implications on your career and even your life.

Here are some examples of what not to do on Social Media if you want to keep your job.

1. Complaining about your Job

It seems like a no-brainer. If you complain about your job or make a derogatory or racist remark on social media, someone at your company is going to hear about it. It’s inevitable. Even if you delete it after the fact, the damage has already been done.
After securing a job at a pizza restaurant, Texas teenager Cella took to Twitter so her friends could know how much she dreaded her upcoming first day, calling it a “f*** a** job.” Her friends may have found it funny, but her new boss certainly didn’t. He replied to her on Twitter that she didn’t need to bother showing up; firing her before she even stepped a foot into her new place of employment. Ouch.

Radical political opinions can get you in trouble no matter who you are, but when you vow to never follow orders from your Commander and Chief, and you happen to be a Sergeant, it can get you in real trouble. Former Marine Sgt. Gary Stein voiced his opinion on both the country and Obama in a highly negative Facebook post. This ended with a dishonorable discharge and some pretty huge life changes as he watched his career go down the drain.

Drawing all over your passed-out friends and posting the picture to social media is nothing new – but it becomes distasteful when you add a Nazi theme, swastikas and anti-Semitic words to your “art”. Caitlin Davis, a cheerleader for the New England Patriots, drew several symbols on an unconscious party-goer. When the photo found its way onto Facebook, fans and random viewers alike were understandably outraged – encouraging the Patriots to do the patriotic thing and fire Caitlin Davis.

3. On the Job Antics

One hospital in Wiltshire, England, didn’t share the sense of humor displayed by its employees when they took a few seconds out of their workday to lie down in strange places around their workplace, tagging it “The Lying Down on the Job Game.” When a few hospital employees decided to play along, they posted pictures of themselves lying around the hospital on the floor or even on the helipad. The higher ups decided if they had that much time on their hands, why not have more? They were all fired. 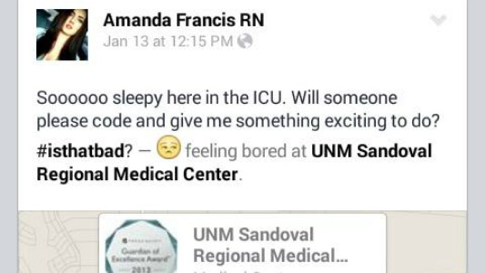 Daycare workers are bound to have bad days, and sometimes a large group of kids can wear your nerves thin. But this caretaker took it too far. Not only did they make an offhanded Facebook post complaining about their job, but they went as far as posting photographs of the children along with snide comments, which actually reached one child’s mother. Following this, the child’s mother immediately made justified complaints to the daycare, ensuring the employee was fired.

Elizabeth Lauten, communications director for the Republican Representative of Tennessee, apparently forgot the value of positive communication. Lauten criticized Obama’s two daughters by posting this on Facebook: “I get you’re both in those awful teen years, but you’re part of the First Family, try showing a little class”. She also criticized the morals of the President and First Lady, and ended her post with a final suggestion to “Act like being in the White House matters to you. Dress like you deserve respect, not a spot at a bar.” Her boss had a suggestion for her as well – apologize and then resign, which she did.

If you feel strongly about maintaining a social media presence and want to continue to voice your opinion, make sure that only the people you want seeing your posts are seeing them. Double check your privacy settings so only friends can see your Timeline. And pay attention to who you add as a friend.

A case study in Harvard Business Review pointed out that your privacy settings are null and void if you’ve friended your boss or your clients – both types of people could be offended by a political opinion or joke. Always think before you post.

Social media is part of your personal brand so you need to remember to keep it somewhat professional at all times. This doesn’t mean that you can’t have fun with your friends or vent from time to time but try to remember that nothing online is ever truly private.