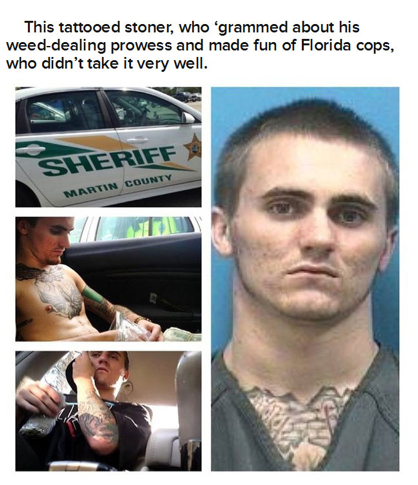 Do criminals want social media likes so badly that they will incriminate themselves? Apparently so.

Last week a cocaine dealer’s student girlfriend helped police bust a major drug ring by bragging about her luxury lifestyle on Instagram. Emily Lock, 22, of Llanbradach, Caerphilly, earned less than $10,000 as a checkout worker at Lidl, but openly flashed designer clothes, shoes and extravagant holidays. Along with her dealer boyfriend Mark Price, 27, they spent over $100,000 on foreign travel and high end goods. So that has authorities wondering where did they get that kind of cash? Drugs maybe?

Lock and Price, who claimed to be a struggling builder, repeatedly purchased Vivienne Westwood handbags, Gucci sunglasses, Christian Louboutin shoes and Christian Dior perfume. She ended up being jailed for 15 months and landed her boyfriend behind bars for seven years.

Check out these other not-so-bright crooks who incriminated themselves with their posts.

1) Conor Murphy, 19, posted a picture of himself on Facebook eating a ‘Cash Sandwich’. The pictures would eventually lead police to connect him to an eight-man gang who stole a fleet of expensive, high-performance cars from some of London’s wealthiest residents. They stole BMWs, Range Rovers, Porsches and a $100,000 Mercedes – as well as jewelry, phones and laptops in 15 separate burglaries. Detectives finally caught them after one of the gang members posted a picture of himself on Facebook sitting on the hood of a stolen black Range Rover.

2) Leon Roberts, 38, and Jade Muzoka, 27, claimed damages after their weeks’ vacation in Turkey. The couple alleged they both suffered from food poisoning and tried to collect around $3,000 compensation. But just days after returning home the bodybuilders uploaded 79 photos on social media bragging about their trip, including pictures of them guzzling drinks and dining on steak, lobster and sushi.

In a doctor’s note they claimed to have been bedridden with vomiting and diarrhea, but their pictures proved otherwise. Luckily, the images they posted saved the resort from having to pay over $2,500 in alleged damages. They were busted and given a 26-week jail sentence and ordered to serve 200 hours community service. 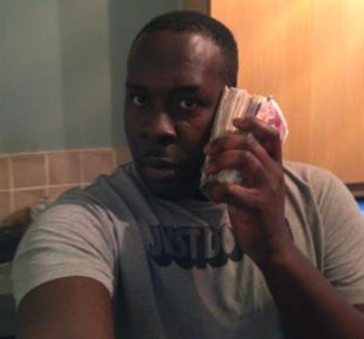 3) Drug dealer Junior Francis, 33, boasted about his extravagant lifestyle on social media before being caught with $7,000 cash and $75,000 worth of crack cocaine and heroin during a home raid. Francis posted pictures online of him posing with wads of cash pressed like a telephone to the side of his face. In an Instagram post he quoted rapper Notorious BIG, writing ‘everything I got I work hard for it’ under a picture showing thousands of pounds in cash on a kitchen top. Smart, right?

He initially denied any involvement in drug dealing during an interview after the home raid but when police checked his mobile phone, they found evidence of transactions with street level dealers in south London. Francis was jailed for six years and eight months after admitting possession with intent to supply Class A drugs and money laundering.

4) The mysterious murder case of a Canadian girl was solved after police found clues in the Facebook selfie posted by her friend. Brittney Gargol, 18, was found dead near a landfill in March 2015 and an autopsy later revealed that she died of strangulation. Gargol’s friend Cheyenne Antoine, 21, plead guilty to manslaughter after they found a Facebook selfie showing her wearing the belt used to strangle her friend. The wide blue woven belt with a large buckle was found on a roadside next to Gargol’s body, and Antoine was seen wearing the same belt in a photo posted to her Facebook account just hours before the killing, according to the Saskatoon Star Phoenix.

Investigators got suspicious of Antoine when she initially told them about spending time with the victim the night she died, but left her friend to visit her uncle. That statement was later proven false. Antoine then told investigators that she and Gargol partied with two men, who allegedly strangled the victim and put a gun to her head to help them. The second statement was also proven false.

“It’s quite remarkable how the police developed this information,” prosecutor Robin Ritter said in court adding that Antoine poses a threat to public safety. She “has issues … and because of those issues, she is dangerous.” At her court appearance Monday, Antoine’s lawyer, Lisa Watson, said her client suffered through sexual, emotional and physical abuse as she grew up in foster care. “My client had some very deep-seeded personal issues that she was not dealing with and unfortunately, for whatever reason, we’ll never know, they turned into a very tragic situation for all involved,” Watson said.