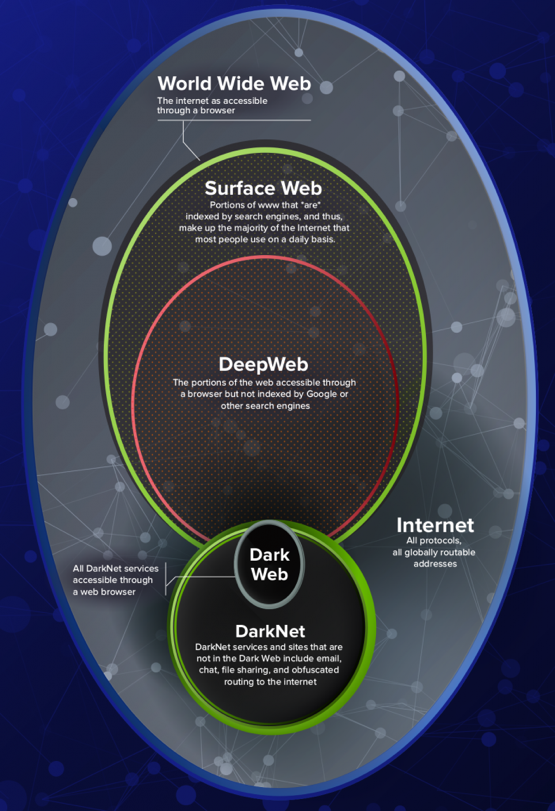 Even if you haven’t heard of the term “dark web”, you can probably discern that it’s not a great place to be.

This anonymous, virtually untraceable area of the internet makes it ripe for illegal activity.

Here’s what you should know about dark web websites:

There is bad stuff, and crackdowns means it’s harder to trust

Many dark web marketplaces for drugs and hacking services featured corporate-level customer service and customer reviews, making navigating simpler and safer for newbies. But now that law enforcement has begun to crack down, the experience is more dangerous. “The whole idea of this dark net marketplace, where people are able to review drugs that they’re buying from vendors and get up on a forum and say, ‘Yes, this is real’ or ‘No, this actually hurt me’—that’s been curtailed now that dark marketplaces have been taken offline,” says Radware’s Smith. There are still sites where drugs are reviewed, says Smith, but they have to be taken with a huge grain of salt.

Also, many dark web drug manufacturers will also purchase pill presses and dyes, and create dangerous look-a-like drugs. “One of the more recent scares that I could cite would be Red Devil Xanax,” he said. “These were sold as some super Xanax bars, when in reality, they were nothing but horrible drugs designed to hurt you.”

Smith says that some traditional drug cartels make use of the dark web networks for distribution, “it takes away the middleman and allows the cartels to send from their own warehouses and distribute it if they want to. You know how there are lots of local IPA microbreweries?” he says. “We also have a lot of local micro-laboratories. In every city, there’s probably at least one kid that’s gotten smart and knows how to order drugs on the dark net, and make a small amount of drugs to sell to his local network.”

Not everything is for sale on the dark web

We’ve spent a lot of time talking about drugs here for a reason. Smith calls narcotics “the physical cornerstone” of the dark web; “cybercrime—selling exploits and vulnerabilities, web application attacks—that’s the digital cornerstone. Basically, I’d say a majority of the dark net is actually just drugs and kids talking about little crimes on forums.”

Some of the scarier sounding stuff you hear about being for sale is often just rumors. Firearms, for instance: as Smith puts it, “it would be easier for a criminal to purchase a gun in real life versus the internet. Going to the dark net is adding an extra step that isn’t necessary in the process. When you’re dealing with real criminals, they’re going to know someone that’s selling a gun.”

Matt Wilson, chief information security advisor at BTB Security, says “there is a tame/lame side to the dark web that would probably surprise most people. You can exchange some cooking recipes—with video!—send email, or read a book. People use the dark web for these benign things for a variety of reasons: a sense of community, avoiding surveillance or tracking of internet habits, or just to do something in a different way.”

Of course, not everything is so innocent, or else it wouldn’t be found on the dark web. Still, “you can’t just fire up your Tor browser and request 10,000 credit card records, or passwords to your neighbor’s webcam,” says Mukul Kumar, CISO and VP ofCyber Practice at Cavirin. “Most of the verified ‘sensitive’ data is only available to those that have been vetted or invited to certain groups.”

“There are alot of countries that block social media,” Yapp said. Even journalists working to spread content in countries where information is restricted, like China, use the dark web. “I would not recommend anybody go and try it unless they know what they’re doing,” Yapp said.