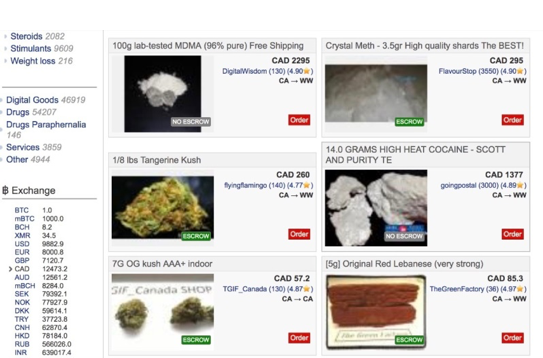 Dark web markets are viewed as one of the crucial sources of fentanyl, synthetic opioids, and other illegal drugs. Often produced in China, these drugs are sent to users found on the dark net. The packages flowing from China are blamed for compounding the opioid crisis in the United States. Empire, one of the largest markets still online, features more than 26,000 drug and chemical listings, including over 2,000 opioids, shipped right to a customer’s mailbox.

And although many of the major sites have been shut down, the online trafficking of illegal drugs has not stopped. The fight against online drug sales is a constant cycle: There are raids, sites are taken down, and a few people are arrested. And after a while the trade and markets pop up somewhere else. “The instability has become sort of baked into the dark-web market experience,” said Emily Wilson, an expert on the dark web at the security firm Terbium Labs. “People don’t get quite as scared by it as they did the first few times.”

Silk Road, the original dark net market that came online in 2011, was shut down in 2013. When its creator, Ross Ulbricht, was put in jail, there was a widespread assumption that his failure and punishment would deter imitators. But that was not the case. In 2014, a massive crackdown called Operation Onymous helped arrest 17 people by exploiting a vulnerability in the anonymity software Tor, which serves as the dark web’s fundamental cloaking tool. Yet by 2017, another site, AlphaBay, rose up to become bigger than Silk Road had ever been. The FBI took down Alphabay in July of that year while Dutch police hijacked the second-largest dark-web market, Hansa. The double takedown, called Operation Bayonet, was intended not only to ensnare dark-web buyers and sellers but to scare them, too.
Just recently, global law enforcement announced the takedowns of two of the world’s largest dark-web drug sites, Wall Street Market and Valhalla. And this past week, the FBI and Europol announced their latest win: The takedown of dark-web news and information site DeepDotWeb, which had quietly made millions of dollars from offering promotional links to black market sites in an underground affiliate marketing scheme. “We think it’s going to have a huge impact,” FBI special agent Maggie Blanton, who leads the bureau’s Hi-Tech Organized Crime Unit, told WIRED. “We viewed DeepDotWeb as a gateway to the dark web.”

But despite those wins, new sites keep popping up due to an economy where the demand—drug-addicted users—remains constant or growing. “History has taught us that this ecosystem is very, very resilient,” says Carnegie Mellon computer scientist Nicolas Christin, a longtime dark web researcher. “It’s part of a cycle, and we’re in the chaotic part of the cycle. We’ll have to see how it recovers. But if I were a betting person I would put more money on it recovering than on it dramatically changing.”

Governments have dedicated increasingly substantial resources to fighting dark net markets, especially as their role in the rise of synthetic opioids has become clearer. In early 2018, the F.B.I. created the Joint Criminal Opioid Darknet Enforcement team, or J-Code, with more than a dozen special agents and staff. Europol has its own dedicated dark web team. During the first few months of 2019, American officials conducted an operation called SaboTor, which focused on the vendors selling drugs on the dark net. There were 61 arrests in just a few weeks. One ring, in the Los Angeles area, was said to be responsible for shipping 1,500 packages of crack, heroin and methamphetamine each month. Richard Downing, who oversees the computer crime section of the Justice Department, said he and his colleagues have focused on techniques that create distrust on the sites by encouraging users to believe that sellers and site administrators have already been compromised and are feeding information to law enforcement.

But despite the numerous shut downs and arrests, data from Chainalysis suggests that before the latest crackdown, transactions on the dark net had recovered to nearly 70% of the previous peak, right before AlphaBay went down, and were growing each month. “After some years now of this cycle, it would be hard to say that it’s likely we’re going to stamp this out completely,” Mr. Downing said. “I am hopeful that our efforts to spread deterrence and mistrust are having an impact on how quickly they come back and how strongly they come back.”

The surviving markets, and new ones that have already popped up, have adopted measures to make them more difficult targets for the authorities. Using alternative cryptocurrencies, like Monero, make transactions harder to track. And DeepDotWeb already has a formidable successor in the social network and news site Dread, which is available only on the dark net. One of the new markets that have emerged recently, Cryptonia, has promised that it has figured out many of the flaws that made previous sites vulnerable to the police. “As geeks, we believe that with the right technology most of these problems can be solved,” the Cryptonia Team Manifesto says. “That’s why we have set out to build the perfect dark net trading platform.”
Most users of the dark web see the attacks as a waste of time. “The war on drugs is a complete failure, a bottomless money pit,” writes one user. But both the FBI and Europol officials see their fights as necessary—even if only to limit the dark web markets’ growth and make it even incrementally harder to buy dangerous drugs like fentanyl online. “Any small win is a victory,” the FBI’s Blanton says. “We care about stopping even one more person from overdosing.”

“Some people you’re not going to deter from going to these markets. But there are a large number of people who would never considering buying drugs on a street corner or from a shady dealer but who will use the perceived anonymity of the internet to do this,” Europol’s Steven Wilson says. “If we can dissuade those people, how many lives to do we end up saving?”

About Us:
We have been mining social media since 2007 for our clients. By utilizing best in class software programs, we offer a service called eChatter.
eChatter works with you to obtain your objectives in a fast, accurate and reliable facet. By keeping our strengthened principals, yet evolving with this industry, we lead in social media monitoring. Since 2007, we have been dedicated to providing our customers with the most authentic data.