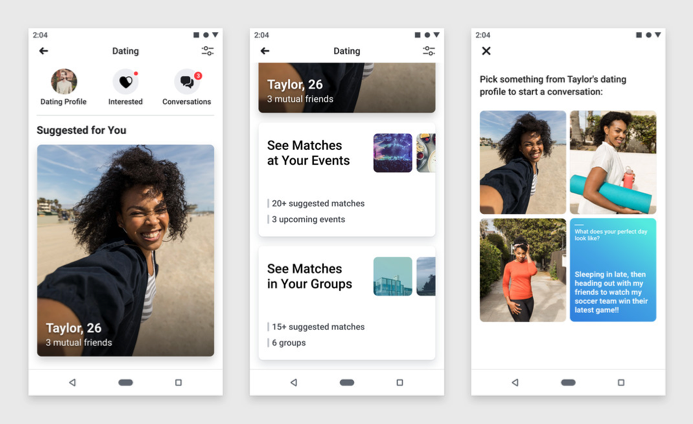 Facebook has finally rolled out its long awaited Dating feature, a match-making tool enabling users to create separate Dating profiles in order to keep their regular profile information separate. Facebook then uses its vast data banks to help match you up with relevant Dating users – and given what Facebook knows about people and their habits – it actually makes a lot of sense, and could provide better matches than other dating apps.

First off, Facebook has announced that users will be able to connect their Facebook and Instagram Stories to their Facebook Dating profile, in order to provide more context to interested people. Not surprising since the company has been bringing its platforms closer together in various ways all year.

On most dating apps, “people are forced to make a decision off this one profile that never changes and is extremely curated,” says Charmaine Hung, a Dating product manager at Facebook. The social network wants to create a more dynamic and authentic experience. Starting today, users will have the opportunity to feature their permanent Instagram posts in their Dating profiles. By the end of the year, Facebook says it will also allow you to share Instagram or Facebook Stories. They won’t be Dating-specific Stories, but the same ones you already upload for your friends or followers; they will also still erase after 24 hours.

Instagram users can also become part of the new ‘Secret Crush’ tool, which allows users to match up with their friends and extended networks. According to Facebook:

Facebook will also now allow Dating users to add Instagram posts to their Dating profile, another way to provide additional context on your life and interests. The options add more ways to make best use of Facebook Dating, which, as noted, could actually be a better way to find a relevant match. Facebook, with 2.4 billion users, has access to the largest database of personal insights ever created, and as research has shown, Facebook data can reveal almost everything about your personality and psychological leanings.

Facebook Dating will live as a tab within Facebook’s main menu on mobile. When you first set up your profile, you will specify your gender and the gender(s) of the people you’re interested in. You can express interest in “everyone,” “women,” “men,” “trans women,” or “trans men.” You can also fill in details like your height, religion, job title, where you work, where you went to school, and whether you have children.

You can complete your profile with up to a total of nine photos and ice-breaker questions provided by Facebook, like “What does the perfect day look like?” Once your profile is set, Facebook will start matching you with potential dates based on “your preferences, interests and other things you do on Facebook.” The company says this includes factors like where you’re from, the Facebook groups you’re in, and where you say you went to school. You also can only match with people who are located within roughly 100 miles of you.

By far, Facebook Dating’s most exciting new feature builds upon a well-established safety practice for online dating. Facebook will allow you to automatically open Messenger from Dating and tell a friend the name of the person you’re going on a date with, as well as the time and place where you plan to hang out. Fifteen minutes before your date happens, that person will receive a notification reminder and access to your live location. Right now your location is only shared for up to an hour. “We’re definitely playing around with the timing,” says Hung. “We did want to make sure that people weren’t accidentally sharing their live location longer than they intended to.”

Facebook Dating also leverages other parts of the social network that apps like Tinder can’t access. You can “unlock” any Facebook event you were invited to or Facebook group you’re in and begin matching with people who also opted in to find potential dates on the guest list or membership roll. All events and groups are fair game—even that concert you attended five years ago. No other dating service has that.