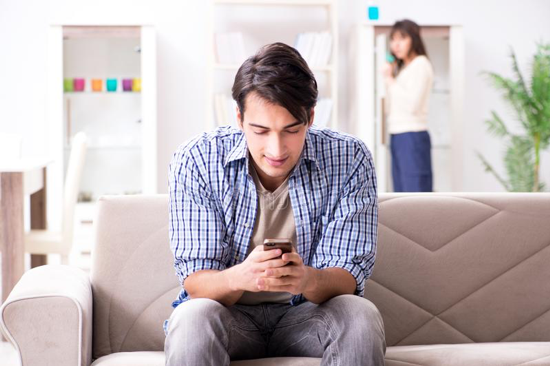 Extended time on social media makes it easier to escape into the lives of others — and find solace in former flames.

Is social media to blame for all of cheating that happens over the internet? Would relationships end if it weren’t for social media? Yes and no. While infidelity is going to happen whether you are online or not, social media has sure made it easier. In fact, Facebook plays a central role in modern infidelity. The average user spends 50 minutes a day on the site, more time than they do on any other leisure activity except for watching TV or movies. Extreme amounts of usage have been shown to skew perceptions of reality and enable secret communications.

Sex and family therapist Jaclyn Cravens Pickens, who is also the director of Texas Tech’s Addictive Disorders and Recovery Studies Program, has studied the relationship between infidelity and social media for almost a decade and shared her findings in such papers as Facebook Infidelity: When Poking Becomes Problematic and Fooling Around on Facebook: The Perception of Infidelity Behavior in Social Networking Sites. She says that Facebook and other social media platforms encourage cheating by offering a false view into people’s lives. “The majority of people going online aren’t posting about their woes or their struggles,” Cravens says. “It’s mostly ‘I’m on vacation,’ or ‘I did this wonderful thing,’ or ‘Here’s this great meal that I’m having.’ This version of life often looks more attractive than the unedited real one of the person scrolling through the feed. “If you’re doubting your relationship or your own happiness, you go to Facebook and you look at somebody else, you may think, ‘Wow, they have it all together,’ ” Craven says. “ ‘They’re this happy, attractive person.’ ”

This phenomena also supports the phrase “the grass is always greener”. What might seem amazing and “meant to be” is what happens at the beginning of every relationship…the butterflies, the excitement, the newness of a developing connection. But just like all relationships, that will wear off and we are left with the issue of maintenance. Daily life starts to take a toll and the onset of reality sets in. The internet is great at producing false pretenses of perfect relationships…meaning unrealistic and unmaintainable.

Facebook makes reuniting with old flames all too easy. Now there are high school reunion groups, mutual friends that pop up, or suggested friends based on people you know or places you frequent. And thanks to social media’s algorithm, it’s likely to put your ex’s photo at the center of your computer screen. When that happy, attractive person is someone with whom you’ve already shared an intimate connection, people are even more inclined to connect. “I’ve seen couples who’ve been married for 15 to 20 years getting on Facebook, reconnecting with old flings from high school that they hadn’t seen in forever,” says Cravens. “It starts as an innocent conversation of ‘How’s life? What have you been doing the last 20 years?’ ” Cravens says. “Very quickly, over computer-mediated communication, it develops into ‘Well, marriage is hard and I’m not happy.’ ‘Oh, no, neither am I.’ ”


Once you have made this intimate connection with the person on the other end of the keyboard, things can accelerate quickly. Sometimes, a smirk emoji is just that. But other times, it can be that first step into opening communication with someone. Photo reactions, comments, or emoji usage allow people to gradually lure in potential future romantic partners. It’s low-commitment communication signaling that while someone isn’t interested in doing anything drastic anytime soon, they want to keep their options open. It’s the phenomenon researchers have termed “back burners.”


“Back burners are the people that you are attracted to, that you keep in touch with just in case your current relationship situation either fails or changes,” says Dr. Jayson Dibble. Dibble is assistant professor of communications at Hope College and the researcher who coined the term “back burner.” In his 2014 study, Using Modern Technology to Keep in Touch With Back Burners: An Investment Model Analysis, Dibble found that, while men are likely to have nearly twice the number of back burners as women, both genders have them. Of the more than 300 people surveyed for the study, nearly all of them said they’d had sexual conversations with at least two people outside of their partner.

Dibble says it’s well-established in social psychology that even people who are happily involved in committed relationships still consider their options. So while someone may have no intention of leaving, they still search the horizon. “Your scanners are still on,” Dibble says. “Even if they’re dulled and blunted a little bit, they’re still on, they’re still kinda noticing who else is out there, if for no other reason than you want to remember, or you still want to know that you got the best deal.”

Social media has a way of triggering that ‘What if?’ question, distracting you from your own relationship, making it harder for you to be fully present. People don’t set out to cross a boundary or set the groundwork for an affair behavior, but internet communication makes it easy to tumble into. “When you’re behind a keyboard, you have time to cultivate the perfect response and be the best version of yourself,” Cravens says. “Or even a version of yourself that in real life doesn’t even exist.”

Does that mean that everyone on social media will cross the line? No, but infidelity is breeding at an alarming rate. Not to mention that apps that help you hide what you do online.  The best thing to do is discuss with your spouse or partner what the rules or boundaries are for Facebook and social media use. There are many happy couples who use social media with no issues.