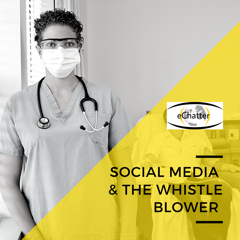 Employees and social media have been a sore spot for employers over the years. Back in the early years of social media, many employers were concerned about the amount of time employees spent in social media during an average work day. Their concerns centered around productivity, rather than what the employees were posting about.

Fast forward to 2020, and we have an entirely new set of problems. During the COVID-19 pandemic, essential worker’s were posting all over social media about their work conditions and at that time lack of PPE. Everyone knows that if you want to get your concerns noticed, turn to social media. It has become one of the most effective ways in which to communicate today on a large scale. If you are lucky, you will be picked up by the news media and your story will become national news.

Social Media and The Whistle Blower

Erin Marie Olszewski is a Nurse-turned-investigative journalist, who has spent the last few months on the frontlines of the coronavirus pandemic, on the inside in two radically different settings. Two hospitals. One private, the other public. One in Florida, the other in New York.

As you can imagine, if you know her story, she has been scrutinized in the media. Some applaud her courage while others try to rip apart her story. So we wondered, who is Erin Olszewski and what does her social media story look like?

We conducted a deep web scan on Erin. Surprisingly, some of her prior “life” was still up for anyone to discover. The deep web scan revealed, as they many times they do, a story of who Erin is and what she has been involved with leading up to her fame.

You can view her entire deep web scan here. (Erin Olszewski) Taking a look at an employee’s online, publicly available, social media content, provides a story board of the person’s life to date. It can reveal a lot about a person, good and bad. In Erin’s case, one is left with the impression that she can be a bit of a rebel rouser. It also shows however, that she is also someone who stands up for what she believes in and isn’t afraid of the consequences.

Can an Employee Get Fired?

This is the new million dollar question. The short answer is, it depends. We did a little research and found the following as a place to start.

In the fall of 2012, the Board began to issue decisions in cases involving discipline for social media postings. Board decisions are significant because they establish precedent in novel cases such as these.

*In the first such decision, issued on September 28, 2012, the Board found that the firing of a BMW salesman for photos and comments posted to his Facebook page did not violate federal labor law. The question came down to whether the salesman was fired exclusively for posting photos of an embarrassing accident at an adjacent Land Rover dealership, which did not involve fellow employees, or for posting mocking comments and photos with co-workers about serving hot dogs at a luxury BMW car event. Both sets of photos were posted to Facebook on the same day; a week later, the salesman was fired. The Board agreed with the Administrative Law Judge that the salesman was fired solely for the photos he posted of a Land Rover incident, which was not concerted activity and so was not protected.

In the end, companies of all sizes should have a written social media policy in place. As an added precaution, lawyers have advised social media to be added to any anti- harassment policy as well.

If you are lucky, you will go viral, get picked up by a news outlet, and your story will become national news. Just like what happened with Erin Marie Olszewski.